I've not written anything here in months and months.  Mainly because I have found that writing about Jazz just doesn't suit me.  There is no way that I can put into words the things that she does that makes me happy or exasperated.  So I'm thinking of just writing stuff that comes to mind for me.  I don't know where this may take me or what will come of this, but I won't know until I write some of it down.  So, if you're a fan of Queen Jazz know that the blog may end up with some things about her, but it will not be the focus anymore.

Messing with the Dog

I do my best to not interrupt Jazz’s schedule on anything. I also tend to keep things in the exact same spot to make it easier for her. Last night, I was reminded why. I decided to rearrange my bedroom. I live in a much smaller house than I did a couple of years ago, so there is a lot more “stuff” in my bedroom than what used to be. While I’ve gone through a lot of stuff – there’s still a fair bit that remains. As I pick up new hobbies or passions, my needs for space changes. My latest passion is sewing, so I’ve got to have a place to work and there is nowhere else in the house. I figured out how to rearrange all this “stuff” and add my large craft table (been in storage) into my room.


This required me moving my bed into a corner instead of in the middle of the room. Well, the Queen was highly upset at this. Add in the fact that this meant her crate and ottoman and pillows had to be moved – she was not happy. Every time I moved something, she softly woofed. Once I got my bed set back up, she jumped up on it and walked every inch smelling it. I don’t know what she thought happened to it, but it was pretty funny. Getting the large craft table into the house is going to be a process as it is too wide to go through any door. It’s this massive steel work table my dad got from “somewhere”. I painted it black eons ago and it is just perfect. It’s heavy and a pain to move – it is going to have to be angled through every door and the hallway. I plan to do this part this weekend.

The good news is that Jazz’s crate easily slides under this table (when I had this in my old workshop, aka the garage, Jazz had her large crate under there) with plenty of room for me to slide my chair under. The end of the table where her crate will be under is where I plan to place my storage containers for supplies. This will give her a designated place to be where she’s still really close but will keep her from being right under my feet.

Everything else in the room will shift because of this…maybe this means a few more items will go away. I’ve already decided to use my mother’s cedar hope chest as a bench on the side of my bed. It will be well padded with a pillow – I have a feeling Jazz will be using this as another perch. My bed sits high enough up that the Queen has a footstool to gain access to the bed – I’m hoping the chest will eliminate this need. When lightning and thunder abound, Jazz likes to curl up under my feet when I’m at my desk – now, the crate will be so close she can go in there and still see me – I think this will help a bit there, too. She will now have “official” spots in 3 different areas of the room. Even though her ottoman was in its spot, she refused to go near it – I don’t know if it’s because there was different stuff near it or if she wanted to make sure the bed didn’t move anymore.

Some dogs really freak out with changes – I know of friend of mine had problems with boxes. His dog got very upset anytime boxes came out in the house. Dogs are just a bit strange…
Posted by LJ at 1:00 PM 1 comment: 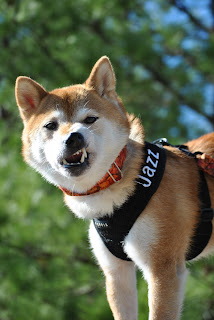 Many times in my life, I am seriously frustrated.  It usually is work-related which may mean I come home exhausted - mentally & physically.  All I want to do is crawl under the covers, tuck my head in, and block out everything else.  When you have a dog - this usually means you can't do this.  The dog's needs come before your own.  Unless your dog is some kind of empath - which I swear Jazz is.  I'm fortunate to have someone at home with Jazz nearly all the time.  She goes out when she has to, but we really try to keep her on a schedule.
Most nights when I come home - Jazz greets me on the carpet (15 feet from the door) as trained to do.  Then she runs to her crate to find an offering worth her owner (it varies nearly every day), she runs this back to me, shows it to me, and then takes it and jumps on my bed with it.  It is now my job to take it from her and toss it for her to catch.  This can go on for a while or just a couple of throws - it depends on Jazz and her ability to read me.  Last night, I was mentally exhausted - she pulled out her newest toy (a Christmas gift from her Secret Santa) and brought it to me.  I tossed it a couple of times and then she tossed it off the bed.  I sat down and she kept pushing at me until I was laying down and she was curled up next to me.
Twenty minutes later, I wake up from my short nap to find Jazz anchoring me to the bed by sleeping across my legs and to find that my attitude was much, much better.  This isn't the first time she's done that and I'm sure it won't be the last - I'm just thankful she's in my life.
Posted by LJ at 12:04 PM 1 comment: 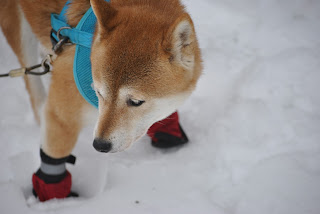 Well, for the second time in a very short time span, we have snow.  Jazz likes snow (as well as she likes anything wet on her paws) when it is nice and soft.  In another words, she's not a fan of the iced-up version we tend to get in the South.  We got approximately 6 inches over the course of last night.  Then it began, sleeting this morning so the snow on the ground got this great crunchy shell.  This meant that Jazz got to have her boots on her front two paws - partially for traction, partially for the exposed skin due to allergies.
Posted by LJ at 7:00 PM No comments:

Sally comes for a visit... 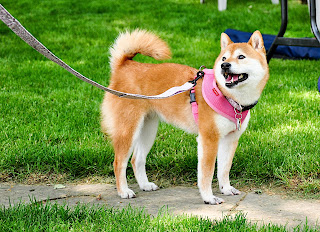 It's not often that Jazz gets to see Sally the Pug anymore.  For a while it was a daily occurance...then it drifted down to weekly...and now, it's sporadic.  A pipe burst the apartment where my niece & brother live, so that had to relocate everything so the complex could re-carpet.  Sally came over and spent the night.  Jazz & Sally's friendship had some bumps early on - much growling and snapping on Jazz's part and wounded pup looks on Sally's.  Over time, Jazz began to tolerate and then to play with Sally.  She's still a bit rough with Sally - even though Sally does a good job holding her own now that she's older.
Things that I noticed:
1. Pugs by nature of their smooshed nose are noisy breathers.  Sally grunts like a pig and is a bit of a barker.
2. Jazz is extremely quiet in comparison, but when Sally began barking a lot, she added in a couple of quiet woofs - just in case they were necessary.
3. Jazz only likes to play on her terms - when she wants and how she wants.  She was not fond of Sally initiating the play - I equate it to not bowing before the Queen before addressing her.
4. My bed is the most important place in the world to Jazz - she defended it from Sally while Sally slept in her crate during the night.  Kid you not, she was at the edge closest to Sally and stared down at the crate all night.
5. When Sally broke the rule about laying on my pillows, Jazz turned into a tattle tale.
6. I love the non-smell of my shiba.
7. Walking two dogs that are not used to walking together is not always a great experience but is fun to watch.
Sally has gone back home, but I was glad to get to see her for a little while.
Posted by LJ at 12:10 PM 2 comments: 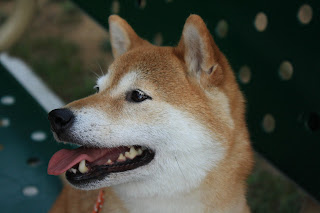 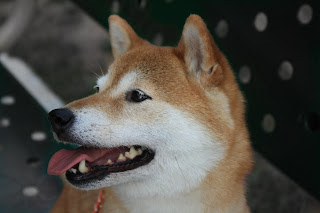 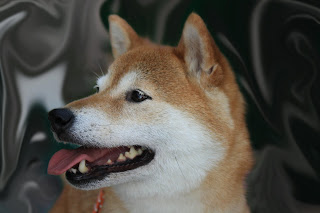 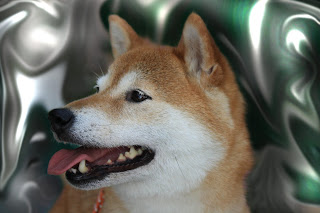 These are the 4 shots in sequence. I love to see pics of Jazz - that being said, I rarely photoshop her images.  Maybe it's because I take so many.  I recently had some downtime and took a photo that Angie Wheeler of Angie Wheeler Photography took and played with it.  Basically, I started off with the original color copy, desaturated the area at 100% around Jazz.  Then, I blurred the background quite a bit.  After this, I smudged the photo to get some cool background.  Then I dodged the highlights to bring out the green in the bench that I hadn't fully desaturated.  I like the way it turned out - very groovy to me....

Places that I Go...a lot